Free agent WR Dede Westbrook tells Chris Tomasson that his agent is handling negotiations with the Vikings right now. Tomasson says it sounds like the Vikings could close the deal with a strong offer. 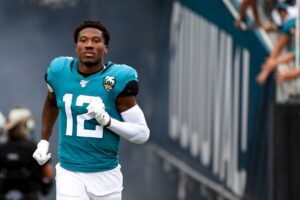 However, Josina Anderson adds that Westbrook plans to visit with the Seahawks on Sunday.

According to Tomasson, Westbrook said he still might also work out for the 49ers and Bengals.

The Vikings and 49ers had preliminary talks with Westbrook back in May, while he also received interest from the Bengals and Chiefs. (NFLTR)

Westbrook has been testing the open market as an unrestricted free agent this offseason.

In 2020, Westbrook appeared in two games for the Jaguars and caught one pass for four yards.