Dolphins HC Brian Flores said TE Adam Shaheen will return to practice today and be activated from the COVID-19 list, per Barry Jackson. 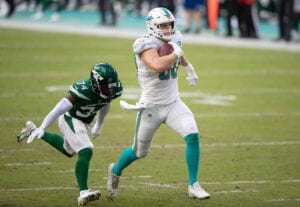 Shaheen missed Week 1 with an extended stay on the reserve list.

Shaheen was making a base salary of $1,270,980 for the 2020 season when he signed a two-year extension midseason worth just under $8 million.

In 2020, Shaheen appeared in all 16 games for the Dolphins and recorded 12 receptions for 150 yards receiving (12.5 YPC) and three touchdowns. Pro Football Focus had him rated as the No. 34 tight end out of 71 qualifying players.