Eagles RT Lane Johnson told reporters on Friday that he’s out for the season with an ankle injury. 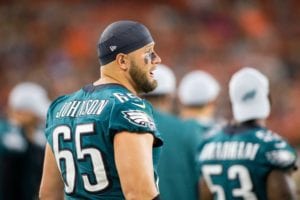 “The inside of my ankle has collapsed,” Johnson said, per Les Bowen.

Johnson added that he’s looking at a four-five month recovery after undergoing surgery to repair his ankle.

You can expect the Eagles to place him on injured reserve in the coming days and add someone to their roster.

In 2020, Johnson has appeared in seven games for the Eagles, starting all of them at right tackle.