The Philadelphia Eagles announced they have signed DT Anthony Rush to the practice squad.

Rush, 25, initially signed with the Eagles as an undrafted free agent out of UAB in 2019. However, the Eagles waived Rush before the start of camp. He caught on with the Raiders briefly and re-signed to the Eagles but was waived again coming out of camp in 2020.

From there, he had a brief stint on the Seahawks’ practice squad before catching on with the Bears. The Packers later claimed Rush off of waivers in 2020 but waived him last year.

Rush joined the Titans in July but was released from their practice squad and caught on with the Falcons’ taxi squad back in September of last year. Atlanta promoted him to the active roster a couple of months later and he lasted with them until October when he was released.

In 2022, Rush has appeared in four games for the Falcons and recorded seven tackles and no sacks. 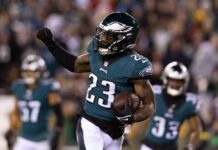