According to Darren Wolfson, extensions talks between the Vikings and S Harrison Smith have picked up “significantly.”

Wolfson expects the two sides to work out a new deal and potentially announce it on the first day of training camp later this month.

The 32-year-old Smith has been a key player on Minnesota’s defense for a long time. Teams can sometimes be hesitant to commit significantly to aging defensive backs, however.

Smith’s name came up in trade talks around last year’s deadline but it seems like Minnesota is now trending toward keeping Smith around a little while longer.

In 2020, Smith appeared in all 16 games for the Vikings and recorded 89 total tackles, 0.5 sacks, five interceptions and 10 pass defenses. ProFootballFocus rated him as the No. 14 overall safety out of 94 qualifying players.

We’ll have more on Smith as the news is available. 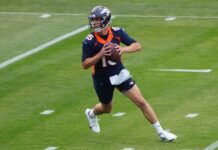