Ian Rapoport of NFL Media reports that the Falcons hosted free agent TE Luke Stocker for a visit on Wednesday. 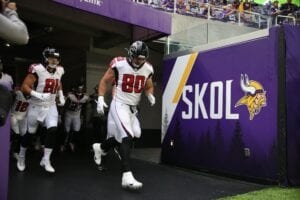 Stocker, 32, is a former fourth-round pick of the Buccaneers back in 2011. He was in the final year of his three-year, $4.8 million contract and set to make a base salary of $1.7 million for the 2017 season when the Buccaneers elected to cut him loose.

The Titans quickly signed him to a two-year contract and Stocker finished out the year in Tennessee. He returned to Tampa Bay the following year before signing another deal with the Titans in 2018.

Stocker joined the Falcons on a two-year contract last year, but was released this past March.

In 2019, Stocker appeared in 15 games for the Falcons and caught eight passes for 53 yards receiving and no touchdowns.