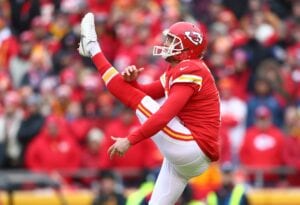 Colquitt had a brief stint on the Chiefs’ practice squad late last season before signing on with the Falcons last month.

In 2021, Dustin Colquitt has appeared in six games for the Falcons and totaled 1,096 yards on 23 attempts (47.7 YPA) which includes seven downed inside the 20-yard line.