Charles, 25, is a former fourth-round pick of the Bengals back in 2012. He lasted just over two years in Cincinnati before he was waived at the start of the 2014 season.

Charles signed on to the Titans’ practice squad to only be released a few weeks later. The Saints gave him a shot last year and wound up signing him to a future/reserve contract towards the end of the 2014 season. However, he was unfortunately among their final roster cuts last year.

The Lions took a chance on Charles this summer and he managed to make the 53-man roster coming out of the preseason. However, Detroit elected to waive him to make room for TE Clay Harbor” href=”http://www.pro-football-reference.com/players/H/HarbCl00.htm?utm_campaign=Linker&utm_source=direct&utm_medium=linker-” target=”_blank” rel=”nofollow”>Clay Harbor.

In 2016, Charles has appeared in two games for the Lions but has yet to record a single statistic. 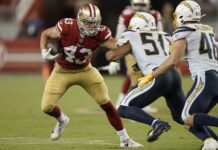