According to Ian Rapoport, the Jaguars are cutting both backup quarterbacks Mike Glennon and Joshua Dobbs. 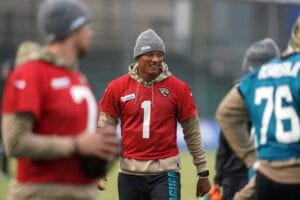 That leaves Jacksonville with just Gardner Minshew and sixth-round rookie QB Jake Luton on the final roster, though Rapoport says one of Glennon or Dobbs could return later.

Glennon, 30, is a former third-round pick of the Buccaneers back in 2013. He played out the final year of his four-year, $3.104 million rookie contract before signing a three-year, $45 million contract with the Bears in 2017.

For his career, Glennon has completed 60.9 percent of his passes for 5,163 yards, 36 touchdowns and 20 interceptions to go along with 90 yards rushing over the course of six seasons and 29 games.

Dobbs, 25, is a former fourth-round pick of the Steelers back in 2017. He was  in the third year of his four-year, $2.99 million contract when the Steeleres traded him to the Jaguars coming out of the preseason last year.

In 2018, Dobbs appeared in five games for the Steelers and completed 6 of 12 pass attempts for 43 yards, no touchdowns and one interception.