Lombardi says a deal could be in place for Ngakoue either today or tomorrow, as they have a “firm offer” in place.

Lombardi now tweets that the Jets are “deeply involved” in trade talks for Ngakoue. He isn’t sure if they’ll be able to get a deal done, but they’re apparently in the mix.

This comes a few weeks after Ngakoue parted ways with this agent.

Ngakoue has made it clear for months now that he wants to move on and play for another team. However, had been very little reported progress in recent months.

Ngakoue has yet to sign his franchise tag, which means the Jaguars can’t fine him for not reporting as he’s not under contract with the team.

Ngakoue has been flexible with his contract demands and is reportedly willing to play out the 2020 season on the franchise tag. The franchise tag for Ngakoue will be $17.78 million fully guaranteed.

However, he has been as resolute in his desire for a trade as Jacksonville has been resolute in turning down offers to this point.

If Ngakoue continues his holdout into the regular season, he would not start losing money until he starts missing games. 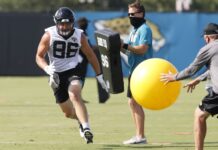