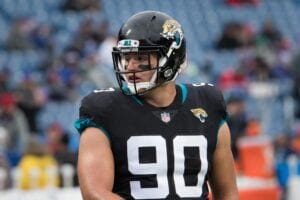 All three players count against the Jaguars 90-man roster and can be activated from the list at any time.

The Jaguars declined Bryan’s fifth-year option this past April that would have cost them $7.638 million for the 2022 season. Bryan will be an unrestricted free agent in 2022.

In 2020, Bryan appeared in 16 games for the Jaguars and recorded 18 tackles and a half sack.