Per John Reid, Jaguars HC Urban Meyer said fourth-round DT Jay Tufele will be out a few weeks after undergoing surgery on a broken hand. 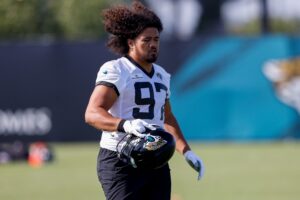 It’ll be interesting to see if Jacksonville places Tufele on injured reserve, which would keep him out a minimum of three games.

Tufele has appeared in one game for Jacksonville and has yet to record a stat.