Mark Long reports that the Jaguars are signing free agent CB Don Carey to a contract on Wednesday.

Carey, 31, is a former sixth-round pick of the Browns back in 2009. He signed a four-year rookie contract but was waived during the preseason and was quickly claimed by the Jaguars. He lasted one month in Jacksonville before signing with the Lions.

He was in the final year of his four-year, $2.98 million contract with Detroit when the Lions re-signed him to a one-year extension for the 2017 season.

In 2017, Carey appeared in 13 games for the Lions and recorded nine tackles, a forced fumble and no interceptions or pass defenses. 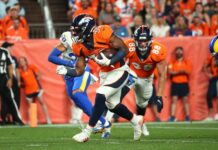