Ian Rapoport of NFL Media reports that the Jaguars recently worked out former QB Tim Tebow and there has been at least some discussion about him signing with Jacksonville. 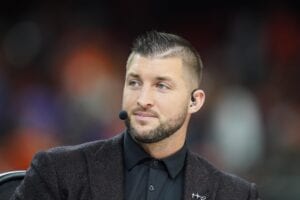 Rapoport adds that Tebow is looking to convert to playing tight end this time around.

Adam Schefter confirms the news and adds that many believe a move to tight end would have extended Tebow’s NFL career had he made the transition earlier.

Tebow, 33, is a former first-round pick of the Broncos back in 2010. He spent just two years in Denver before he was later traded to the Jets in 2012. He had a brief stint with the Patriots before the Eagles surprisingly gave him an opportunity.

From there, Tebow signed with the Mets and spent the past five years in their minor league system.

For his career, Tebow appeared in 45 games for the Broncos and Jets and completed 47.9 percent of his passes for 2,422 yards, 17 touchdowns, and nine interceptions. He also rushed for 989 yards and 12 touchdowns over the course of three seasons.