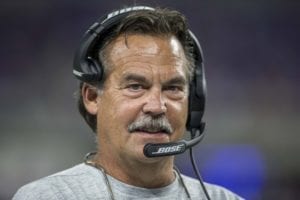 Beyond that, George has former Raiders and Browns HC Hue Jackson as his “top target” for offensive coordinator, according to FootballScoop.

The Tigers are reportedly working to finalize a deal with Jeff’s son, Brandon Fisher, who served as a defensive analyst on the Auburn staff under former HC Gus Malzahn.

Fisher came up as a possibility for the Cowboys’ vacancy before they hired Mike McCarthy, but Dallas never interviewed him for the job.

Fisher, 63, began his coaching career with the Bears back in 1985 as a defensive assistant. He worked for the Eagles, Rams, 49ers and Oilers before he was hired as head coach of the Houston/Tennessee franchise in 1995.

After several years with the Oilers and Titans, Fisher was hired by the Rams in time for the 2012 season.

During his 22-year coaching career, Fisher has won 173 games and lost 165 to go along with one tie (51.2 percent). His teams have made the playoffs six times including one trip to the Super Bowl back in 1999 while he was with the Titans.

Jackson, 55, began his NFL coaching career back in 2001 as the Redskins RBs coach. He worked for the Bengals, Falcons and Ravens before he was hired by the Raiders as their offensive coordinator in 2010.

The Bengals hired Jackson as a special assistant to Marvin Lewis before parting ways with him in 2019.