According to Aaron Wilson, the New York Jets brought in several players for workouts on Tuesday. 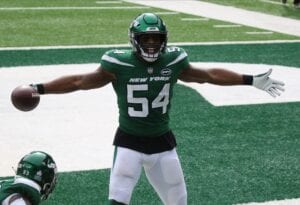 Of this group, the Jets are reportedly signing Goodson and Morstead to contracts.

Williamson, 29, was a fifth-round pick of the Titans back in 2014. He played out his rookie contract with Tennessee before agreeing to a three-year, $22.5 million contract that includes $16 million guaranteed with the Jets.

The Jets traded Williamson a 2022 seventh-round pick to the Steelers for a 2022 fifth-round pick.

In 2020, Williamson appeared in 15 games for the Jets and Steelers, recording 120 tackles, one sack, one interception and three passes defended.