Tom Pelissero of NFL Media reports that former Jets RB Josh Adams officially cleared waivers on Monday and has elected not to re-sign to their practice squad. 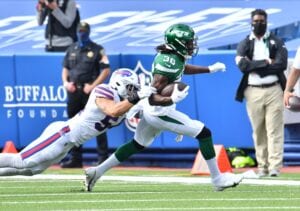 According to Pelissero, there are a lot of running back-needy teams right now and Adams wants to see what other opportunities are out there.

Adams then re-signed on a one-year deal with the Jets this offseason and was added to the practice squad before being called up.