Per Jeff Zrebiec, Ravens QB Lamar Jackson says he’s engaged in some contract talks with GM Eric DeCosta this week while in town for mandatory minicamp. 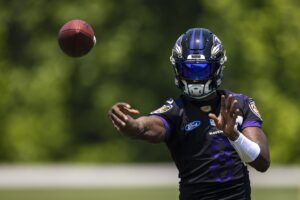 Jackson went on to add he expects to stay with the Ravens for the rest of his career. He also rejected the idea out there that he’s waiting to win a Super Bowl before signing a new deal, according to Zrebiec.

Asked if he would play in Week 1 or report to the start of training camp without a new deal, via Jonas Shaffer, Jackson acknowledged, “It’s part of the conversation.”

Jackson is a decorated quarterback already with one MVP award under his belt, so it’s a little bit curious to see him entering a contract year.

The Ravens have consistently said they view Jackson as their long-term quarterback but the delay seems to be coming from Jackson’s end.

“Unless he has a change of heart and calls Eric and says I’m ready. But it’s like, Eric can’t keep calling him and say, ‘Hey Lamar, you really need to get in here and get this thing done,'” Ravens owner Steve Bisciotti said earlier this offseason about why negotiations haven’t picked up.

The Ravens also are generally tight-lipped, but in all their public comments express zero doubt that an extension for Jackson is their preferred outcome.

“I’d love something (to) get done,” Ravens HC John Harbaugh said. “I think he’s planning on something being done. We’re planning on something being done at some point in time. The way the rules work right now, it doesn’t have to be a huge priority. I’m confident it’s going to happen. Of course, until it happens, it hasn’t happened. I’m confident it’s going to happen. I know he’s going to be our quarterback. Really, when you’re coaching and you’re playing, that’s what you think about. We know we’re going to be playing this year, and Lamar is going to be our quarterback. I got to do the very best job I can to have him ready to play his best football. That’s really what my job is.”