Ravens QB Lamar Jackson was asked about his contract talks with the team as he enters the final season of his rookie deal. He said he is hopeful he and the team can agree to an extension before training camp starts at the end of July. 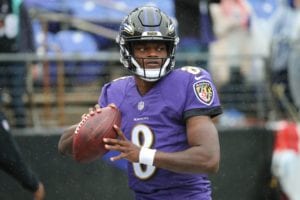 There’s been little in the way of updates on the status of negotiations, but Jackson did confirm he is in talks with the Ravens, which was not known for sure earlier this offseason.

Jackson, speaking at a youth camp, also refuted speculation that talks had hit a bad place based on him changing his social media header to a photo that said “I Need $.” He said it was from a movie he watched and thought it was funny.

“I don’t know why people are blowing it up. I just saw Bleacher Report post it. They just take anything that’s posted on social media and just blow it up, and try to think for you. I don’t take it too seriously,” Jackson said. “They’re making it seem like I’m talking to the Ravens when I’m not. Our contract discussion is going on already. But it ain’t about that though. I’m not putting my business life on social media. I won’t ever do that. I won’t put my personal life on social media. I’ll show stuff, but I won’t throw subliminal [messages] out. That’s not me.”

Asked about whether he would hold out from camp without a new deal, Jackson said, “I don’t have that on my mind.”

The Ravens also are generally tight-lipped, but in all their public comments express zero doubt that an extension for Jackson is their preferred outcome.

“I’d love something (to) get done,” Ravens HC John Harbaugh said. “I think he’s planning on something being done. We’re planning on something being done at some point in time. The way the rules work right now, it doesn’t have to be a huge priority. I’m confident it’s going to happen. Of course, until it happens, it hasn’t happened. I’m confident it’s going to happen. I know he’s going to be our quarterback. Really, when you’re coaching and you’re playing, that’s what you think about. We know we’re going to be playing this year, and Lamar is going to be our quarterback. I got to do the very best job I can to have him ready to play his best football. That’s really what my job is.”