On Tuesday, 49ers GM John Lynch told reporters that he’s very optimistic about getting a deal in place for WR Deebo Samuel, who reported to training camp on time. 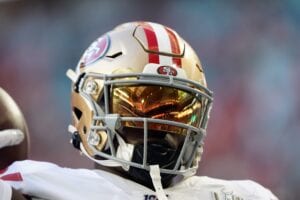 “We’ve had productive and substantive talks… We’re excited about moving forward with him as part of this team,” Lynch said, per Jonathan Jones.

Samuel requested a trade out of San Francisco this offseason and while he reportedly hasn’t officially rescinded the request, the 49ers have been much more optimistic about getting a deal done with him in recent weeks.

San Francisco turned down offers from the Jets and Lions during the draft for Samuel this offseason.