According to Michael Gehlken of the Dallas Morning News, the Cowboys and franchise TE Dalton Schultz are currently “far apart” in extension negotiations. 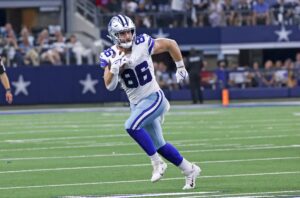 In fact, Gehlken says that “talks would need to take on new life to culminate in a contract, and market conditions could compel the Cowboys to wait.”

The parties have until July 15 to negotiate a long-term extension before the deadline. Otherwise, Schultz will play out the 2022 season under the franchise tender of $10.93 million.

The Cowboys could franchise Schultz again in 2023 at a cost of $13.12 million fully guaranteed.

Gehlken mentions that the $13.69 million per year the Browns recently gave to TE David Njoku is now the floor for a long-term deal for Schultz.