According to the Athletic’s Jeff Howe, Patriots CB Stephon Gilmore‘s name came up in trade talks coming out of the preseason a couple of weeks ago. 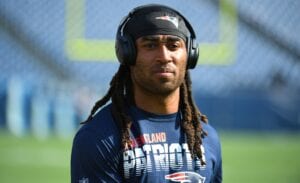 However, Howe adds there wasn’t as much buzz around him as there was last year. The Patriots have never been close to pulling the trigger on a Gilmore trade, per Howe.

He explains other teams have been reluctant to trade a high draft pick for Gilmore and then presumably give him a major contract extension when he’s on the other side of 30.

As for the Patriots, they don’t want to just give Gilmore away, as when he’s healthy he still is an elite defensive player. Howe thinks the relative lack of trade interest could also play a role in Gilmore’s lack of a new contract so far.

Health is also a concern, as Gilmore is on the PUP list recovering from a quad injury that ended his 2020 season. He’ll be eligible to return in Week 7, right before the NFL’s trade deadline after Week 8.