Grant Gordon reports that former Buccaneers RB Le’Veon Bell won’t return to football this year and will instead focus on his boxing career following his upcoming bout with fellow NFL RB Adrian Peterson. 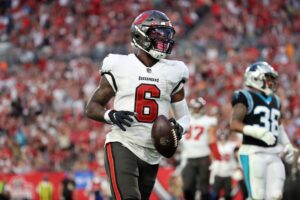 “This year, I know I’m not going to be playing this year because I want to focus on boxing.” Bell told Gordon. “This isn’t a one-off fight.”

Meanwhile, Peterson doesn’t rule out a potential NFL return for himself, telling Gordon: “Even after this fight I’ll still be on my same routine waiting for an opportunity to present itself.”

Bell, 30, is a former second-round pick of the Steelers back in 2013. He played out the final year of his four-year, $4,120,600 rookie contract, but Pittsburgh used their franchise tag on him.

The Ravens signed Bell to their practice squad and eventually added him to their active roster. He was later waived and caught on with the Buccaneers, who let him go back in January of 2022.

In 2021, Bell appeared in five games for the Ravens and rushed for 83 yards on 31 carries (2.7 YPC) to go along with one reception for -1 yard. He then appeared in three games with the Buccaneers and rushed eight times for 18 yards. He also caught four passes for 31 yards and one touchdown.

We will have more news on Bell as it becomes available.