The Detroit Lions officially claimed LB Shaun Dion Hamilton off of waivers from Washington on Monday. 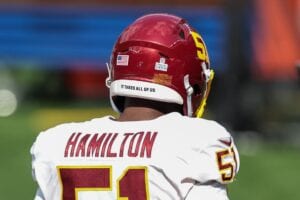 Hamilton, 25, is a former sixth-round pick of Washington back in 2018. He’s entering the final year of his four-year, $2.6 million contract.

In 2020, Hamilton appeared in 14 games for Washington and recorded 21 tackles.