Ian Rapoport reports that LB Romeo Okwara did, in fact, suffer a torn Achilles’ and will miss the remainder of the 2021 season. 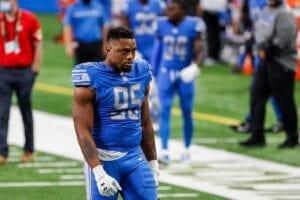 You can expect the Lions to place him on injured reserve in the coming days and add someone to their roster.

Okwara, 26, originally signed on with the Giants as an undrafted free agent out of Notre Dame back in 2016. He was in the final year of a three-year, $1.62 million contract when the Giants waived him coming out of the preseason in 2018.

The Lions later claimed Okwara off of waivers and he finished out the year in Detroit. He later re-signed with the Lions on a two-year deal. Detroit then signed Okwara to a three-year, $39 million deal this past offseason.

In 2021, Okwara has appeared in four games for the Lions, recording six tackles and one sack.

We will have more news on Okwara as it becomes available.