Chargers WR Mike Williams, who is in line to be an unrestricted free agent this offseason, told reporters on Monday that he’s hoping to remain with the team. 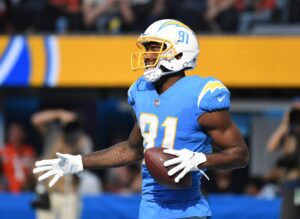 “I would like to. I don’t like changes. … I have lifelong friendships here,” Williams said, per Gilbert Manzano.

Williams will be one of the best overall free agents in the coming months and should have plenty of interest if he hits the open market.

He could be a candidate for the Chargers’ franchise tag if they’re unable to reach a long-term deal in the coming months.

Williams, 27, was selected with the No. 7 overall pick by the 2017 NFL draft. He was entering the final year of a four-year contract worth $19.75 million which included a signing bonus of $12.50 million when the Chargers picked up his fifth-year option last year.

In 2021, Williams appeared in 16 games for the Chargers, recording 76  receptions for 1146 yards and nine touchdowns.