Redskins RB Adrian Peterson has already defied NFL historical conventions for his position by running for 1,000 yards last year at the age of 33. Peterson could accomplish that feat again with 180 rushing yards in Washington’s season finale, but if thing go according to his plans, he’ll have plenty more chances to add to his career total.

“I can see myself playing to 40,” Peterson told NFL Media’s Jane Slater via Pro Football Talk. “People look at that and say, ‘Oh, my God! That’s crazy,’ but they’ve been doing that for the past two years and surprise, surprise, I’m still able to do it at a high level.” 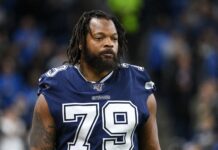 183,016FansLike
7,623FollowersFollow
269,198FollowersFollow
© NFLTradeRumors.co is an independent news source and has no affiliation with the National Football League (NFL), NFL.com, or any team(s).
wpDiscuz