Bears HC Matt Nagy discussed some parallels between Alex Smith, who he worked with in Kansas City, and QB Mitch Trubisky.

“What I would say with Alex, here’s a No. 1 pick in the NFL draft, he’s being compared to Aaron Rodgers his whole career. Same thing, it’s never gonna leave Mitchell, being compared to Patrick [Mahomes] and Deshaun [Watson],” Nagy said, via SI.com. “That’s just the way it is, that’s never gonna change, there’s nothing that any of us can do to control that. But what we can control is how we play football, and what we do. We can’t worry about anything else.

“Alex, what I think is so special about Alex, he has a mental toughness to him, where he got through all of that, even past the point Mitchell’s in right now, after he went through a bunch of different coordinators. I was in the stands in San Francisco, with the Eagles, when he was getting booed off the field. But I’ve also seen him completely overcome that, come to Kansas City, and absolutely dominate in the win column. He always got criticized for being a quote/unquote game manager. I know, number one, if you talk to his teammates about what kind of competitor, and player he is, how much better he made them, they’d all tell you that was the case. It came with a lot of wins.

“Now, in 2017, had a 104.7 QB rating, and an aggressive and attacking mentality. So it took time, but he was persistent. We always talk about persistence over resistance. Be persistent, stick to it, stay mentally tough, and that’s where Mitch is at right now. We know he’ll step up to the challenge.”

Green Bay has a host of younger wide receivers on the back end of the roster who have an opportunity to carve out a bigger role in 2020. One who has caught the Packers attention already is former Canadian Football League WR Reggie Begelton. Green Bay hasn’t seen Begelton on the field yet, but he’s been impressing them during virtual meetings, which is a hard setting for a player on a futures deal to stand out.

“The one thing that really stands out is you can tell he is super invested,” Packers HC Matt LaFleur said via ESPN’s Rob Demovsky. “He’s done a great job at picking up everything that we’ve thrown at him. He does a great job. We’ve been quizzing these guys quite a bit, and he is repeatedly at the top. I’ve been just super impressed with his approach and just excited to see him and see what he’s got to offer on the field.” 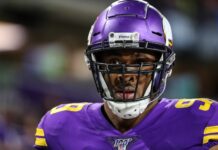