Buccaneers HC Bruce Arians said he would like to re-sign free-agent QB Blaine Gabbert in the near future.

“I really hope that we can get Blaine done, soon,” Arians said, via JoeBucsFan.com “And go in and have normal competition. Blaine has proven what he can do for us. So, yeah, hopefully we can get that done soon.”

Falcons HC Arthur Smith told reporters that he and GM Terry Fontenot were hired to win now while also planning for the future.

“They hired the wrong guys if they thought we were going to lower expectations, take our time, and rebuild,” Smith said, via Peter King. “That’s just not who we are. The expectation is to win now, build for the future, have plans.”

Smith also gave QB Matt Ryan a glowing review and is excited to work with the veteran.

“With Matt, I see a really high-quality starting quarterback who’s thrown for 55,000 yards in this league and had unbelievable experience and is still throwing guys open. It doesn’t sound absurd anymore to say, ‘Hey, I want to play till I’m 40.’ If he didn’t want to play, that would be a different set of problems.” 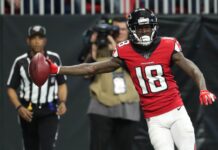