The Falcons currently have questions at left guard, center, and right tackle, with HC Arthur Smith calling the offensive line “a developmental position, and you find guys anyway you can.”

“If you look at people that have had a sustained run of success … it certainly helps them … if you feel great and you take a guy in [the] first round. But it’s not like you need five first-rounders to be a good offensive line,” Smith said, via D. Orlando Ledbetter of the Atlanta Journal-Constitution. “You need the right guys in there with the chemistry who can play. Versatility is key. It’s a long season. It’s 17 games. You’ve got eight guys up on game day. Guys [must] be able to play multiple spots.”

There’s some optimism in league circles about the Panthers following their trade for QB Baker Mayfield. The team has desperately been trying to solve the position since Cam Newton was hurt and released back in 2019 and 2020, and Mayfield might be the option with the best track record so far despite his recent struggles.

“We got a look at him twice over the past two years,” an NFL offensive play-caller told Heavy’s Matt Lombardo. “And he was clearly better than our quarterback. In every single aspect. I think he is much better than what everyone is making him out to be. Remember, just two years ago, he was winning playoff games in Cleveland. And everybody loved him. Now, there’s this whole narrative that people think he stinks. I really hope he goes down to Carolina and tears it up. I love the way this kid competes.”

There’s obviously a reason the Browns moved on from their former No. 1 pick and traded for Deshaun Watson amidst all of his issues, however. An AFC director of college scouting articulated a belief that’s pretty widely held around the league — Mayfield doesn’t know his limits as a player, and it’s one of his biggest weaknesses.

“The problem with Baker Mayfield is that he tries to do too much at times,” the executive said. “And he isn’t talented enough to be a consistent playmaker like someone like Patrick Mahomes, or Josh Allen.”

“If Baker comes out and becomes a distributor of the football rather than trying to be the guy who makes all the plays,” they added. “This will be a successful trade for Carolina. McCaffrey and Moore are really dynamic playmakers, and Baker has to realize that. That will ultimately dictate just how successful the Panthers and Baker have the chance to be.” 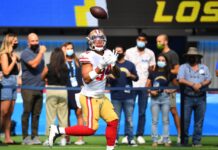