“It wasn’t a bad talk,” Sims said via Sam Fortier of the Washington Post. “It was right after we signed [Cody] Latimer, right after the draft. It was like, “[Rivera] brought in bigger bodies. I was like, ‘Okay, that’s what he likes.’ I’m not saying I’m on the cut block. I’m just saying: ‘Be different. Be another Steve Smith.’ He started off the same guy. They only thought he was going to be a returner, and he’s a [potential] Hall of Famer. . . . He was a small guy who played big. He wasn’t going to limit himself to being 5-9.”

Falcons Expected To Re-Sign S J.J. Wilcox On A Visit 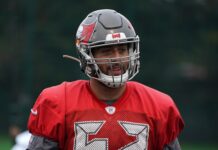 For Atlanta Falcons I would rather see Clownly or Ezekiel Asina from Seattle. Instead of takk McKinley.