Buccaneers QB Tom Brady spoke about possibly making his final appearance at Foxboro Stadium in their Week 4 matchup against the Patriots.

“There’s a lot to happen between now and then, and obviously I know the challenge of beating a great team like that, a great organization, great players, so many friends that are still on the team that still are my brothers,” Brady said, via SiriusXM NFL Radio. “Unfortunately, we’re going to be on different sides of the stadium this time around.”

Brady reiterated that they must focus on training camp and other games prior to Week 4, but is excited about his return to New England.

“I’ve got a lot of familiarity playing in the stadium. You know, we’ve got to first get to training camp and see where we’re going to be and then get through the first three weeks of the year, but I’m sure it’ll be a great opportunity for me to go back to a place I know as well as anyone. It’ll be a great day for football.”

Despite how things ended in New York, there are still a lot of people who work for the Jets and used to work for the team who are optimistic about QB Sam Darnold in his new home. If the Panthers put more talent around Darnold and ask less of him from a mental standpoint, there’s hope he can be the latest player to thrive when freed from the clutches of Adam Gase.

“I think if you put together a splash tape of 20 plays from the last couple years, Sam’s would be as good as anyone’s,” said one ex-Jets staffer via Sports Illustrated’s Albert Breer. “He has freaky ability. He’s a really good player. It was just a tough situation, a combination of a lot of different things—and he was stuck where he couldn’t control the things he was dealing with. He battled through injuries, rotating offensive linemen, the back never played as well as we thought he could.

“And he still finished 6–2 two years ago, and played his best ball at the end of the year again last year. I don’t think it’s fair to judge him yet. The kid handled it liked a stud, never blamed anyone, and he could’ve blamed everyone. He took responsibility for everything. He’s a great teammate.” 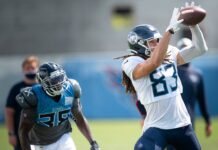