ESPN’s Chris Mortensen is reporting that the Miami Dolphins are ready to offer Tony Sparano a one-year extension. Despite the news of a possible extension, sources have told Mortensen that the teams pursuit of Jim Harbaugh may have strained the existing relationships between Sparano and Dolphins front office.

The Dolphin have put Sparano in a bad position after they have openly courted other head coaches for his position. Offering him a one-year deal has more to do with them preventing Sparano from being a lame-duck coach than a personal endorsement. You could draw a parallel between this situation and the contract offer the Redskins gave to Donavan McNabb following his benching. 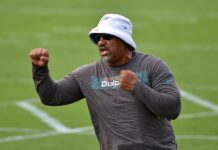