Peter King’s Monday Morning Quarterback column had plenty intersting ideas and rumors this morning. Check it out in case you’re unfamiliar, it’s always a good read. One of the most interesting topics that King discussed was the possibility that the New England Patriots could acquire a first-round pick for 2012 because where they are currently sitting in this years draft.

As King points out, the first selection of the second-round (33) is likely to be a hot commodity especially this year considering the number of teams in need of a quarterback and the amount of prospects that are projected to go in the second-round. We’ve already mentioned that many believe that there will be a run on quarterbacks at some point in the first two rounds which leaves the Patriots are in the favorable spot.

Kings writes that “the Patriots could successfully argue — I believe — that the 33rd pick is worth more than a 2012 first-rounder this year. The primary reason is they could have more than one bidder for the pick, because of the paucity of quarterback prospects and the need of more than one team by the time round one ends.”

Desperate teams make desperate moves and this play right into the Patriots hands. It would make sense for New England to shop both the No. 28 and No. 33 overall picks to find the best available deal. Bill Belichick and company will have plenty of leverage in either position and trading down a bit isn’t going to hurt their 2011 draft any considering that they’ll still have No. 17 and another two picks in the third-round on top of whatever the receive in return for the one of the picks.

New England has done an incredible job of loading up on draft picks every year and this years draft could allow this trend to continue. 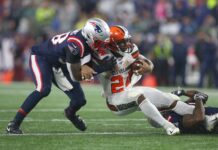 183,051FansLike
7,623FollowersFollow
269,236FollowersFollow
© NFLTradeRumors.co is an independent news source and has no affiliation with the National Football League (NFL), NFL.com, or any team(s).
wpDiscuz