According to Albert Breer, there has been no recent progress on the contract situation between the Patriots and CB Stephon Gilmore.

However, Breer notes people from both sides have been on vacation and with the start of camp looming, the time to get something done is approaching.

In an interview last week, Gilmore said he just wants what he’s worth. The tone from both sides has been optimistic about reaching a resolution, but until they do a trade can’t be ruled out.

Gilmore held out of mandatory minicamp to make a point about his contract. He’s due just $7 million in 2021 and is seeking a raise after winning Defensive Player of the Year in 2019. 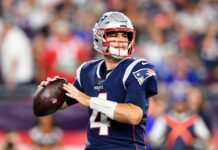