According to Joe Person, the Panthers are cutting K Ryan Santoso. 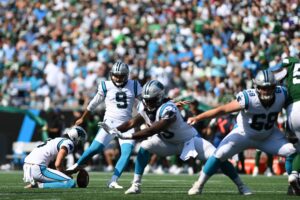 Carolina had traded a conditional pick for Santoso to the Giants and would have had to give up a seventh if Santoso played in Week 2 against the Saints.

Santoso had an uneven debut for Carolina, making two field goal attempts but missing an extra point. The Panthers also punted rather than attempt a 51-yard field goal at one point in the first half.

The Giants traded Santoso to the Panthers during the preseason for a conditional seventh-round pick.

In 2020, Santoso has appeared in one game for the Panthers and made 2-2 field goal attempts and 1-2 extra points.