According to Ian Rapoport, the Panthers are waiving LB Andre Smith. 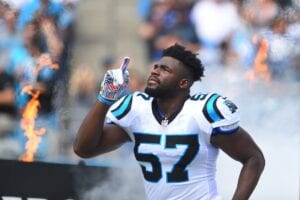 Smith was competing for a backup position in Carolina at linebacker and had been mostly a special teams contributor his first two seasons.

In 2019, Smith appeared in all 16 games for the Panthers and recorded five total tackles.