Aaron Wilson of PFN reports that while there’s nothing imminent regarding the Panthers dismissing HC Matt Rhule, “patience is growing thin from ownership.” 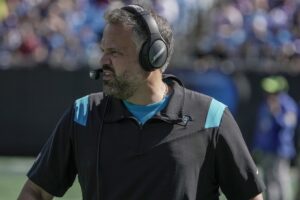 According to Wilson, Panthers owner David Tepper is expected to seek an experienced former head coach as Rhule’s eventual replacement.

“I’m expecting, and many others around the league expect Tepper to go with a proven head coach with significant NFL experience,” a league source tells Wilson. “That would mean looking at Sean Payton or a Dan Quinn. Tepper has been patient, but patience only stretches so far. At some point, you have to win, and they haven’t won nearly enough games.

“Of course, it doesn’t help the situation that Baker Mayfield hasn’t played very well. Rhule is in a tough spot and I don’t see how he can fix the situation. It feels pretty inevitable from everything I’m hearing that he’ll eventually be fired.”

Last week, Ian Rapoport reported that Tepper plans to be patient instead of reactionary when it comes to the status of Rhule.

Rhule entered his third season in Carolina already on the hot seat and an 1-2 start has not turned down the temperature.

Rhule, 47, began his coaching career at Albright as a linebackers coach back in 1998. He worked for a number of schools including Buffalo, Western Carolina, UCLA and Temple before being hired by the Giants as an assistant offensive line coach for the 2012 season.