Mike Garafolo reports that an MRI revealed Monday that Patriots DE Henry Anderson did in fact suffer a torn pectoral muscle and will miss the remainder of the 2021 season.

You can expect the Patriots to place him on injured reserve in the coming days and add someone to their roster.

According to Ian Rapoport, Patriots DE Henry Anderson is feared to have suffered a torn pectoral muscle in Sunday night’s loss to the Buccaneers. 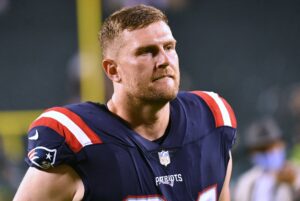 Anderson is having an MRI to confirm if that’s the case, and if so he will be out for the remainder of the season.

Anderson, 30, is a former third-round pick of the Colts back in 2015. He was entering the final year of his rookie deal when he was traded to the Jets in 2018.

He re-signed with New York to a three-year, $25.2 million extension in March of 2019 and was entering the final year of his contract when the Jets released him earlier this offseason.

Anderson then landed with the Patriots on a one-year deal.

In 2021, Anderson appeared in four games for the Patriots and recorded three total tackles with no sacks.