The New England Patriots are elevating LB Jahlani Tavai for Week 3, according to Field Yates. The team is also releasing OL Jake Eldrenkamp from their practice squad, per Doug Kyed. 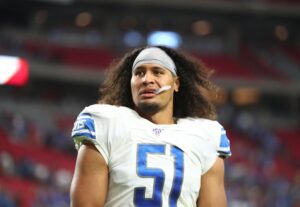 Tavai, 24, was taken in the second round out of Hawaii in 2019 by the Lions. He was entering the third year of his four-year, $6.9 million contract when Detroit cut him loose.

He then caught on with the Patriots practice squad prior to the 2021 NFL season.

In 2020, Tavai appeared in all 16 games for the Lions and recorded 57 tackles, no sacks or interceptions, two forced fumbles, one recovery, and no pass defenses.