Field Yates of ESPN reports that Patriots TE Matt LaCosse is opting out of the 2020 season. 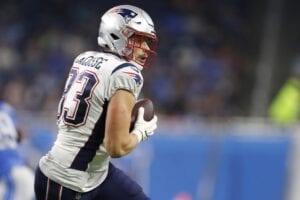 LaCosse is the eighth Patriots’ player to opt-out of the upcoming season.

LaCosse, 27, wound up signing on with the Giants as an undrafted free agent out of Illinois back in 2015. He was waived during the preseason and later had a brief stint with the Jets before returning to the Giants during the 2015 season.

The Broncos signed LaCosse off of the Giants’ practice squad towards the end of the 2017 season. However, they declined to tender him a restricted offer and he later caught on with the Patriots last year.

186,436FansLike
7,623FollowersFollow
275,806FollowersFollow
© NFLTradeRumors.co is an independent news source and has no affiliation with the National Football League (NFL), NFL.com, or any team(s).
wpDiscuz