According to Tom Pelissero, the Raiders have re-signed QB Nathan Peterman to a one-year deal. 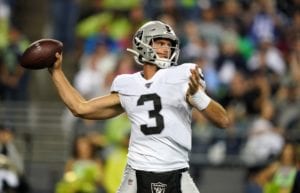 Pelissero notes the deal can be worth up to $2.775 million, which likely means the base value is closer to the minimum.

Peterman has impressed Raiders HC Jon Gruden in his limited showings and it appears he’ll have the chance to stick around and compete for a backup role.

Peterman, 26, is a former fifth-round pick of the Bills back in 2017. The Bills made the decision to move on from Peterman in November of 2018 and he eventually signed on to the Raiders’ practice squad.

The Raiders brought Peterman back on a futures contract for 2019. However, he was placed on injured reserve coming out of the preseason. Peterman returned to the Raiders in 2020 on an original-round restricted tender but later agreed to a pay cut. He completed 3-5 passes for 25 yards in his one appearance in 2020.

In 2018, Peterman appeared in four games for the Bills and completed 54.3 percent of his passes for 296 yards, one touchdown and seven interceptions. He also rushed for 50 yards and touchdown.