Adam Schefter reports that the Raiders have requested permission to interview Patriots ILB coach Jerod Mayo for their head-coaching job and Patriots director of player personnel Dave Ziegler for their GM job. 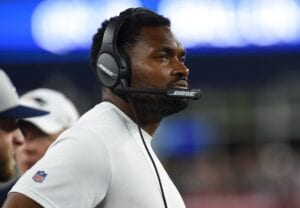 Ian Rapoport adds that the Raiders have also placed a request to interview Colts executive Ed Dodds for their GM job.

The Raiders are officially opening up their searches, even though they still have interim HC Rich Bisaccia and GM Mike Mayock in place.

Mayo interviewed for a couple of jobs last year and is drawing interest again this offseason including with the Broncos and Texans.

Mayo, 35, was drafted in the first round by the Patriots out of Tennessee in 2008. He played eight seasons with the team before retiring following the 2015 season.

He joined the Patriots coaching staff as an inside linebackers coach in 2019.

We’ll have more on the Raiders’ searches as the news is available.