We covered the Gilreath signing earlier in the day, so you can check out our article for more info regarding him.

Vaughn (6-foot-1, 190 pounds) signed on with the Jets last season as an undrafted free agent out of Oregon. However, he was later waived at the end of training camp, so this will be his second opportunity to crack a 53-man roster. During two seasons at Oregon, Vaughn totaled 21 receptions for 259 yards.

Palardy (5-foot-11, 191 pounds) was an undrafted free agent out of Tennessee. He is a left-footed kicker who appeared in a total of 46 games over the course of his four-year college career. Palardy converted 37-of-50 (74%) of his field goal attempts to go along with 5,024 punting yards (42.9 average). 50 of his punts were downed inside the 20-yard line. 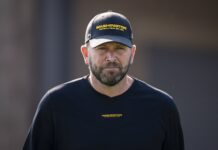