Here’s a running list of reports and rumors pertaining to the Rams’ head-coaching search. Be sure to check back for the latest news.

We’ll have more regarding the Rams’ coaching search as the news is available. 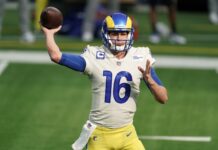