According to Jeff Zrebiec, the Ravens placed CB Chris Westry on injured reserve after sustaining a torn meniscus. 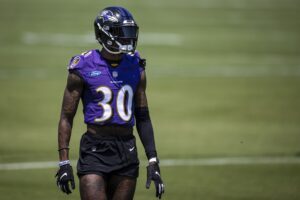 Yesterday, Jeremy Fowler reported that Baltimore was considering adding a veteran cornerback and had an interest in CB Buster Skrine.

Westry, 24, signed with the Cowboys as an undrafted free agent out of Kentucky in 2019. He made the active roster as a rookie but was waived coming out of camp in 2020 and re-signed to the practice squad.

Westry bounced on and off Dallas’ practice squad throughout the year before ultimately signing a futures deal with the Ravens for the 2021 season.

In 2021, Westry has appeared in one game for the Ravens and recorded three total tackles, no interceptions and no pass defenses.