Ian Rapoport and Aditi Kinkhabwala report that the Ravens are placing QB Tyler Huntley on the COVID-19 list. This will likely mean that veteran QB Josh Johnson would get the start for Baltimore in Week 16 if starting QB Lamar Jackson is still unable to go due to an ankle injury. 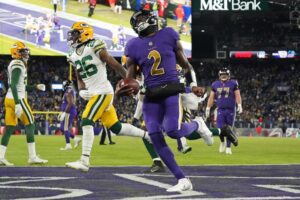 Huntley, 23, went undrafted out of Utah back in 2020 before catching on with the Ravens. He bounced on and off the practice squad before eventually making his debut replacing Lamar Jackson.

In 2021, Huntley has appeared in four games for the Ravens, completing 68.8 percent of his passes to go with 743 yards, three touchdowns, and one interception. He has also rushed 29 times for 168 yards and two touchdowns.

We will have more news on Huntley as it becomes available.