According to Field Yates, the Ravens promoted three players from the practice squad ahead of Thursday’s game, including LB Devon Kennard, DT Isaiah Mack, and DB Daryl Worley. 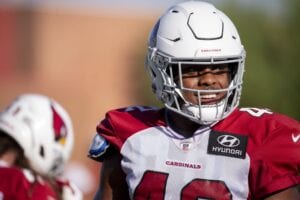 Kennard was among the team’s final roster cuts before being resigned to the practice squad ahead of the 2022 season. Arizona once again cut him loose and he caught on with the Ravens’ practice squad in recent weeks.

In 2021, Kennard appeared in 15 games for the Cardinals and recorded 24 tackles, seven tackles for loss, no sacks, a fumble recovery, and two pass deflections.

Worley, 27, is a former third-round pick of the Panthers back in 2016. The Panthers traded him to the Eagles in return for WR Torrey Smith during the 2018 offseason, but he was cut loose soon after.

Worley signed on to the Bills’ practice squad soon after before the Raiders added him to their active roster. He signed with the Cardinals for the 2021 season but was cut coming out of the preseason.

Worley caught on with the Lions practice squad last year but was cut later in the season. He’s been on and off of the Ravens’ roster ever since.

In 2022, Worley has appeared in three games for Ravens but has yet to record a statistic.