The Pittsburgh Steelers announced that they have officially signed eight undrafted free agents on Saturday. 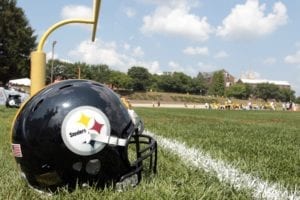