According to Mark Kaboly, the Steelers are releasing OT Zach Banner on Wednesday. 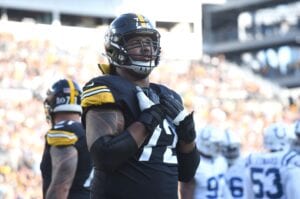 Pittsburgh will free up $6 million in cap space and $1,625,000 in dead money by releasing Banner, per OverTheCap.

Banner, 28, is a former fourth-round pick by the Colts in the 2017 NFL Draft. Indianapolis cut him loose at the start of his rookie season and was claimed by the Browns.

Cleveland waived him in March of 2018 and was claimed by the Panthers, but cut during spring camp. He signed with the Steelers in August of 2018 and finished out his rookie contract in 2019. He re-signed as a restricted free agent in 2020 but played just one game due to injury. Pittsburgh re-signed Banner to a two-year deal this last offseason.

In 2021, Banner appeared in seven games for the Steelers and made no starts.